YouGov looks at the different groups Britons fall into, based on what kind of Brexit they will accept

Earlier this month YouGov asked the public whether or not each of the four Brexit options realistically on the table (leaving with no deal, May’s deal, a softer “Norway-style” deal, or remaining in the EU after a second referendum) were acceptable to them. 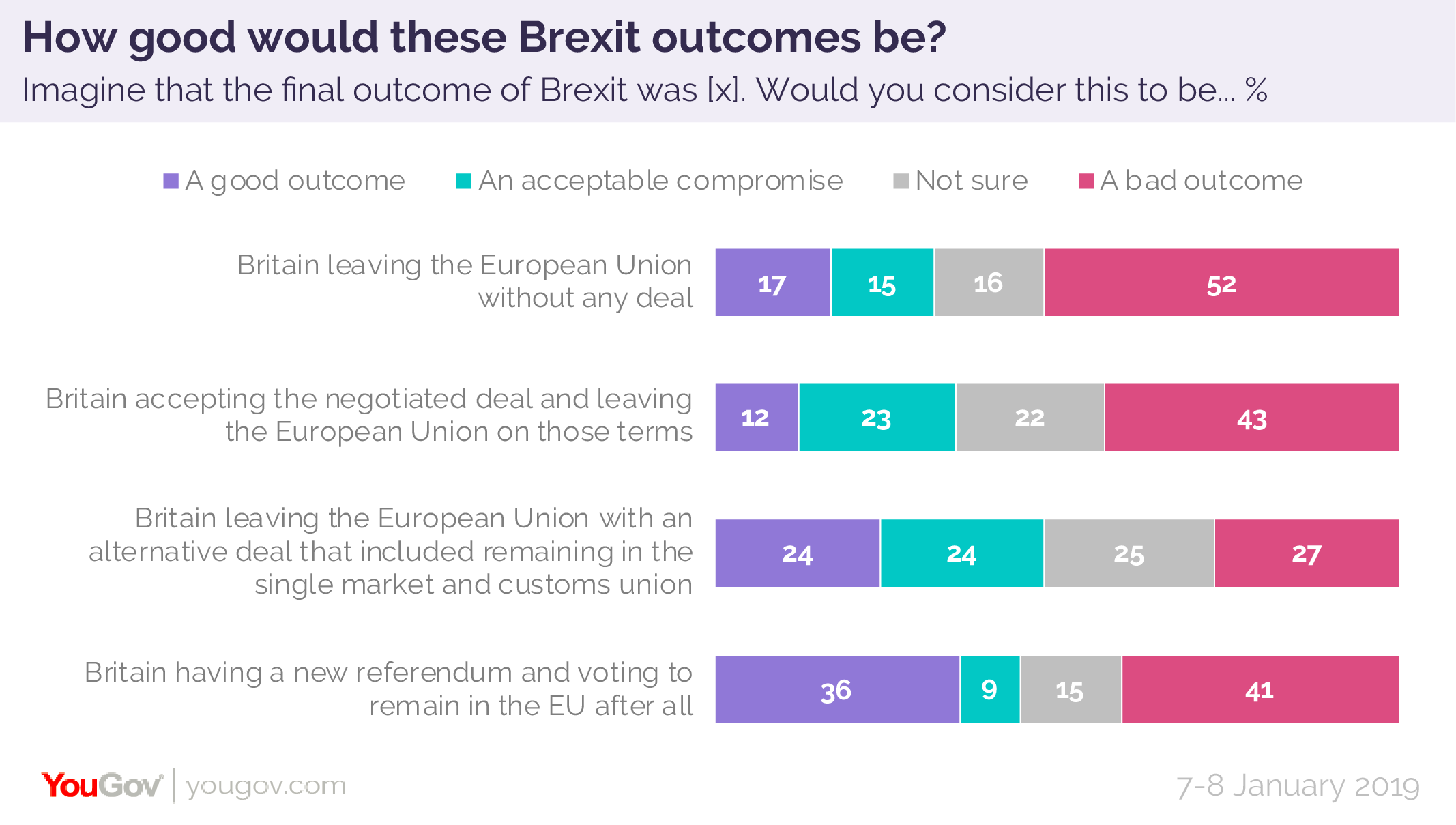 Now we've taken a more detailed look at the data, seeing which combinations of Brexit outcomes people would feel happy with – or, at least, see as an acceptable compromise.

The analysis sees the public broken into 16 groups based on their responses. Of these, we’ve taken a look at the largest six in more detail. 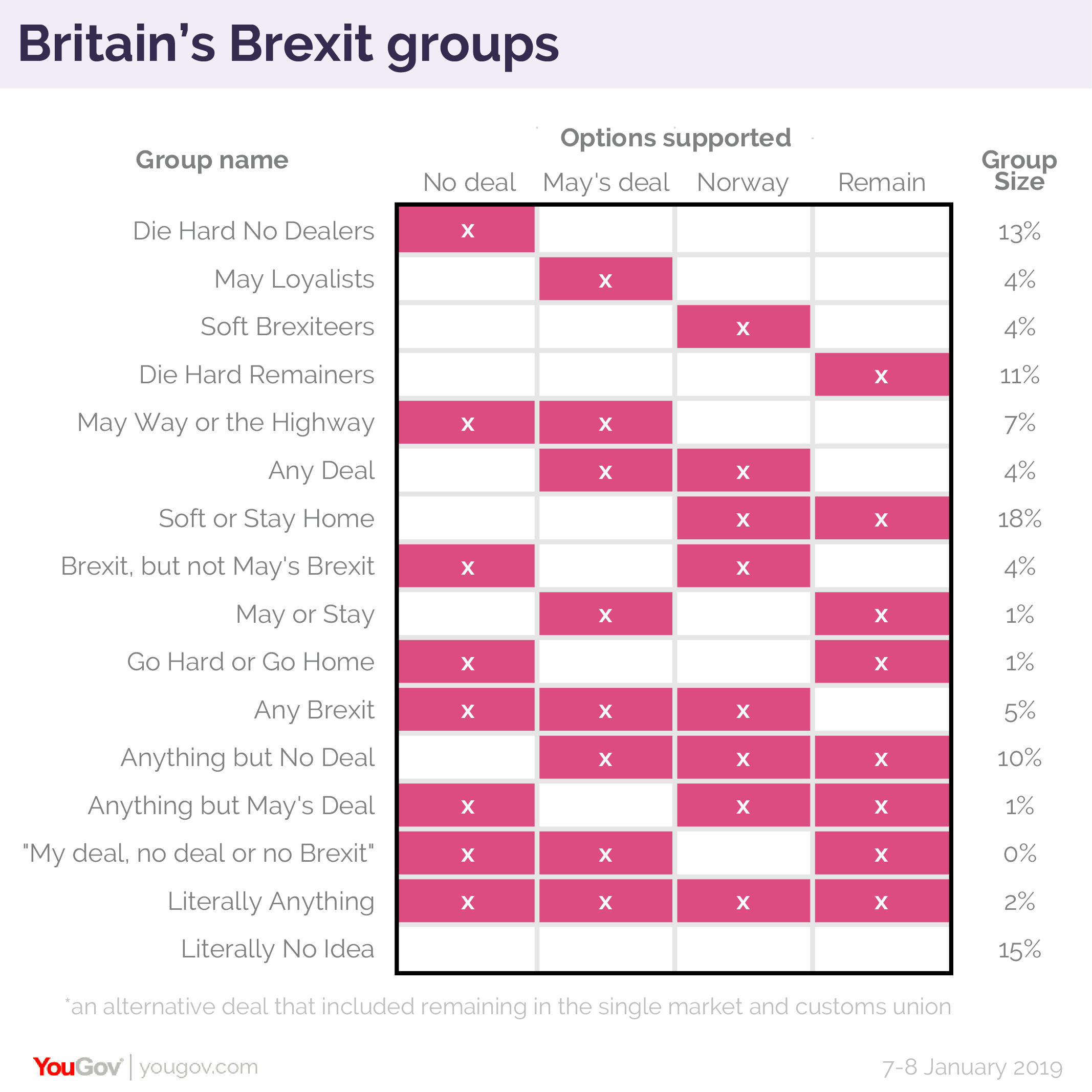 The largest, at 18%, is the “Soft or Stay Home” group, who would be happy with (or at least accept) either a softer Brexit deal that included single market and customs union membership, or staying in the EU after all.

This group would only begrudgingly accept a Norway-style deal – the majority consider it an acceptable compromise (57%) rather than an actively good outcome (43%). By contrast, the overwhelming majority (86%) would regard staying in the EU after all as a good outcome.

Literally No Idea – 15% of Britons

The second largest group is the “Literally No Idea” group, which encompasses 15% of the population. The vast majority of this group answered 'don’t know' to each of the Brexit questions – while the size of this group relative to the others is fairly large, 15% of the general public answering 'don’t know' to a political polling question is a fairly standard figure. This group is largely composed of those who did not vote at the EU referendum or in the last general election.

The third largest group, at 13%, are the “Die Hard No Dealers”, for whom no option other than a no-deal Brexit is acceptable. They are immediately followed by the “Die Hard Remainers”, at 11%, who likewise would not countenance anything short of staying in the EU.

Anything But No Deal – 10% of Britons

Next up is the “Anything But No Deal” group, numbering 10% of all Britons. You can probably guess which Brexit options they would be willing to back.

When it comes to whether they see those various Brexit options as desirable or merely acceptable, the large majority would be happy for Britain to Remain (82%), but also with a Norway-style deal (66%). They would only tolerate the deal the Prime Minister has negotiated, however, with 73% merely saying it is “an acceptable compromise”.

May Way or the Highway – 7% of Britons

Last of the six groups we’re looking at are the “May Way or the Highway” group, who support either the Prime Minister’s Brexit deal or otherwise leaving the EU with no deal at all. This group accounts for 7% of all Britons.

The other 10 groups are each composed of 5% of Britons or fewer, and between them account for 26% of Britons overall.

The results reveal that only relatively small numbers of voters hold uncompromising views on Brexit. For instance, just 18% of Remain voters are members of Die Hard Remainers group who will accept nothing less than staying in the EU.

The majority of Remain voters fall into the groups Soft or Stay Home (35%) or Anything But No Deal (19%), which would both accept a Norway-style Brexit, with the latter group also being able to live with May’s deal. Overall, 74% of Remain voters belong to a group that would countenance some form of Brexit. 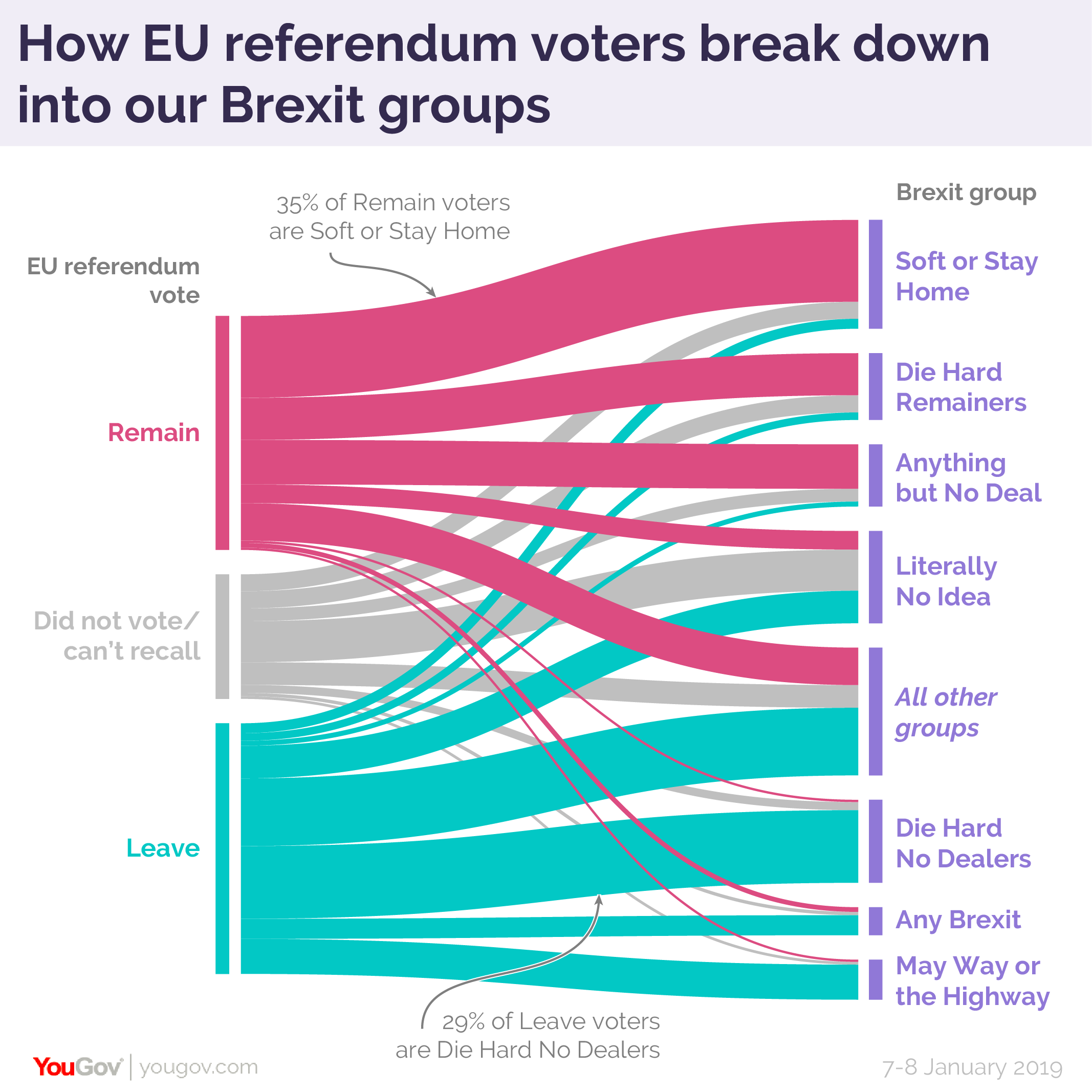 Leave voters are more likely to be fixated on a single Brexit outcome, but even so this still applies to the fewer than one in three (29%) who are members of the Die Hard No Dealers group. Unlike among Remain voters, however, the uncompromising no deal Brexiteers form the largest faction among Leave voters.

The next largest group of Leave voters – May Way or the Highway, who will accept either May’s deal or a no deal Brexit – is less than half the size, at 14%. A similar proportion (13%) also belong to the Literally No Idea group.

The most populous group among Conservative voters is also the Die Hard No Dealers group, with one in four Tory voters (25%) saying they will accept nothing short of a no deal Brexit. A further 15% are May Way or the Highway, the second largest group, followed by 10% who are in the Any Brexit group.

As with Remain voters, the Soft or Stay Home mindset is the most common among Labour voters, with almost a third (32%) being of the view that we should have a Norway-style deal or else just remain in the EU.

Another 15% are Die Hard Remainers, while 13% are Literally No Idea. 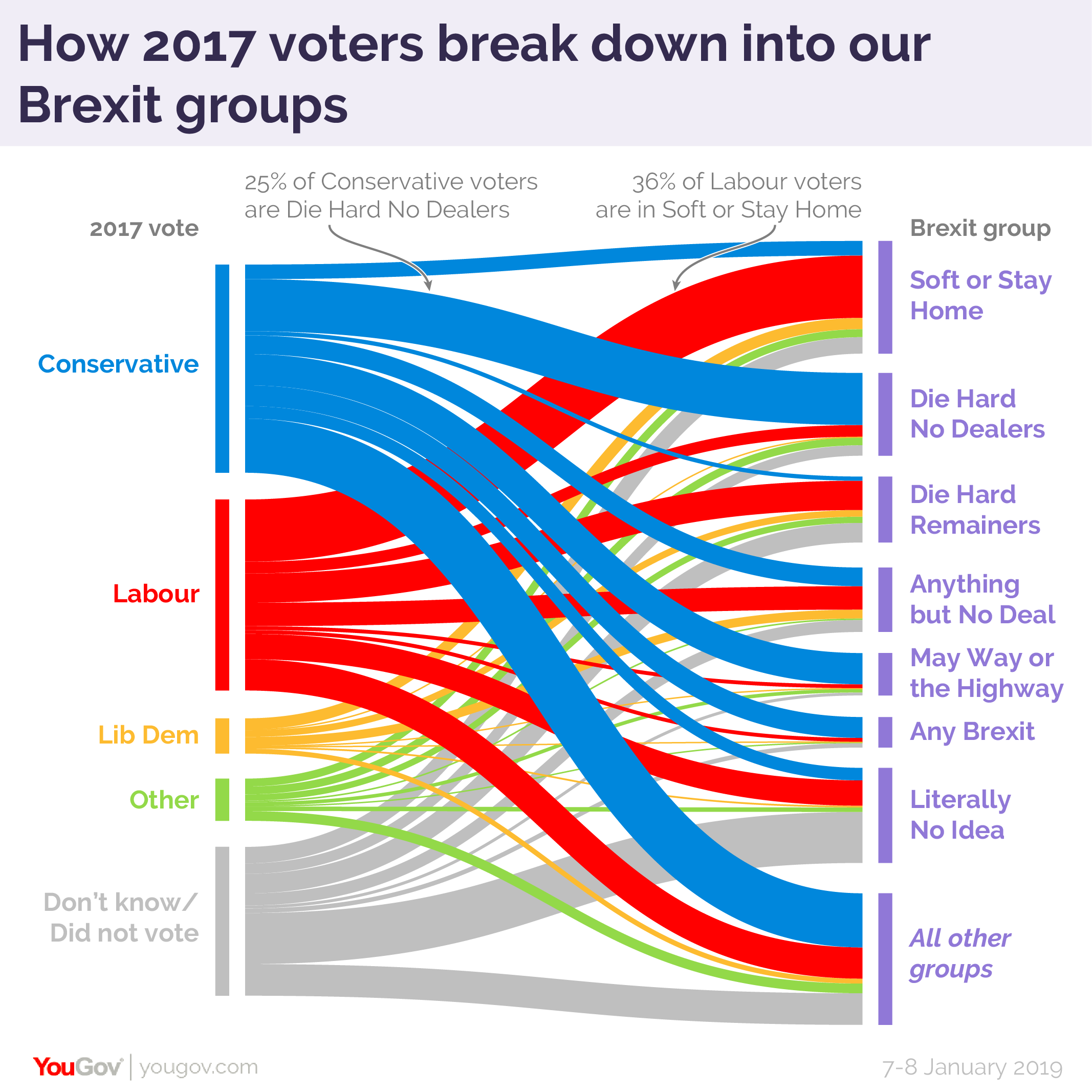