Europeans remain more enthusiastic about NATO than Americans despite falling support for membership among public in Britain, France and Germany

The results of a new international YouGov study could make worrying reading for the leaders of NATO nations as the alliance celebrates its 70th anniversary today.

The survey, conducted in key NATO nations, finds that support for membership has fallen in several European countries over the last two years. 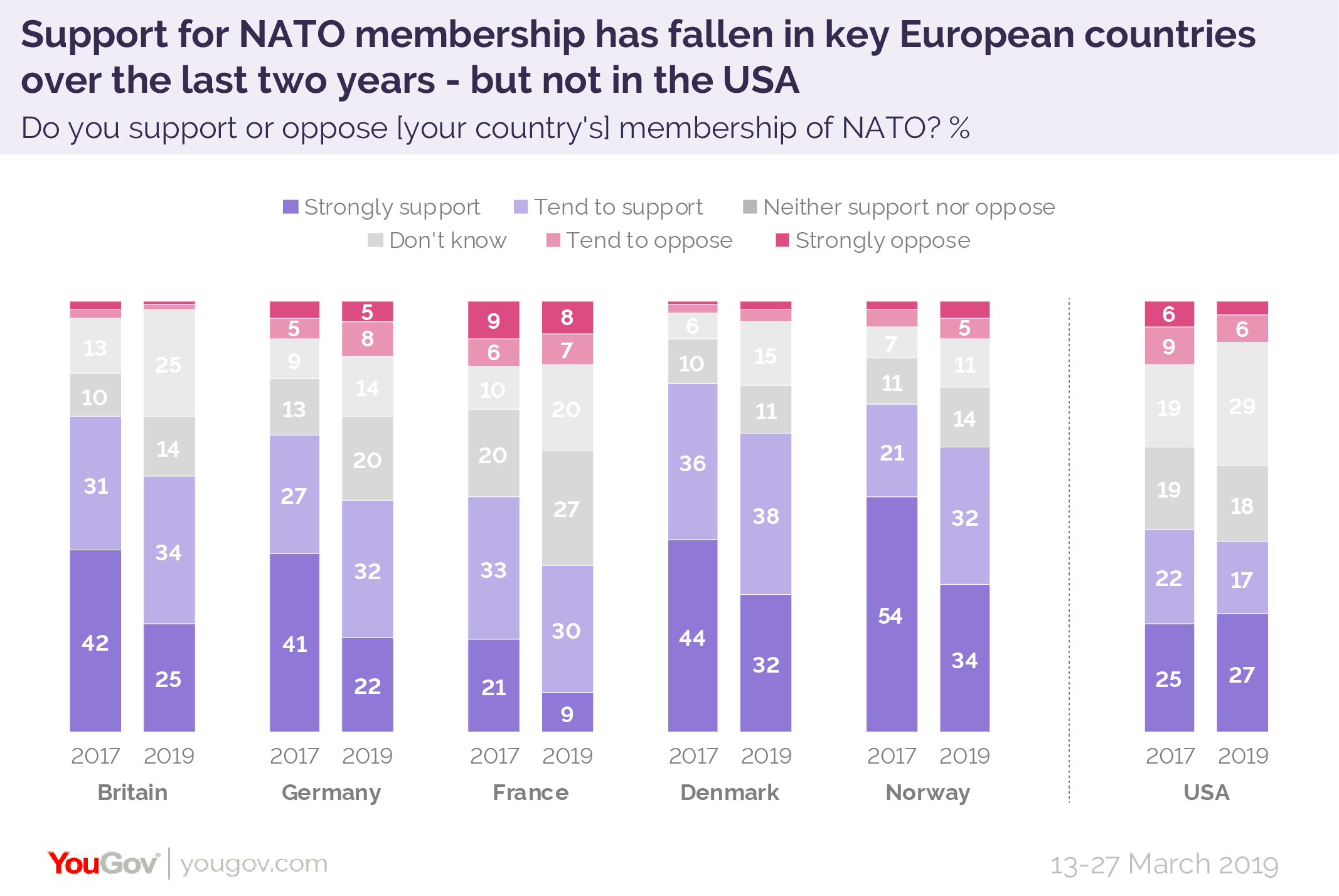 Fortunately for the alliance this drop in support is not accompanied by an increase in opposition –movement seems to be from supporting membership to the middle ground or “don’t know”. The proportion of people actively opposing their own country’s NATO membership has remained unchanged.

And in America, the backbone of the alliance, public opinion has changed far less drastically – Americans remain less enthusiastic about NATO membership than their European counterparts. Some 44% of Americans support being a part of the alliance, within the margin of error from the 47% who said the same in 2017. At the same time, opposition has fallen from 15% to 10%.

Europeans seem to be becoming less sure of NATO’s relevance

Two years ago, Donald Trump branded NATO “obsolete”. Our survey found a similar decrease in certainty when we asked whether NATO still had an important role to play in national defence, similar to the softening favourability towards the alliance.

While Europeans still tend to see NATO as important by wide margins, the proportion of people who hold this to be true has fallen by between seven and ten percentage points. In France the figure is down from 52% to 42%, in Germany from 62% to 53% and in Britain from 68% to 59%.

Again, however, this is not matched by an equivalent rise in people thinking that the alliance no longer has a useful role to play.

And as with their views on NATO membership, American attitudes on NATO’s relevance remain largely unchanged (standing at 43%, from 46% in 2017).

The public in NATO nations still think their country should uphold their Article 5 commitments in principle, but this seems to rest on which country they are asked to defend

Despite a weakening enthusiasm for the alliance there is still strong support across the member nations we surveyed for the Article 5 provision which underpins NATO: that an attack on one is an attack on all, obliging all member countries to defend one another.

Clear majorities of Americans (57%), Britons (66%) and Germans (58%) back the pledge, with around half of French people (53%) also being willing to come to the defence of their allies. 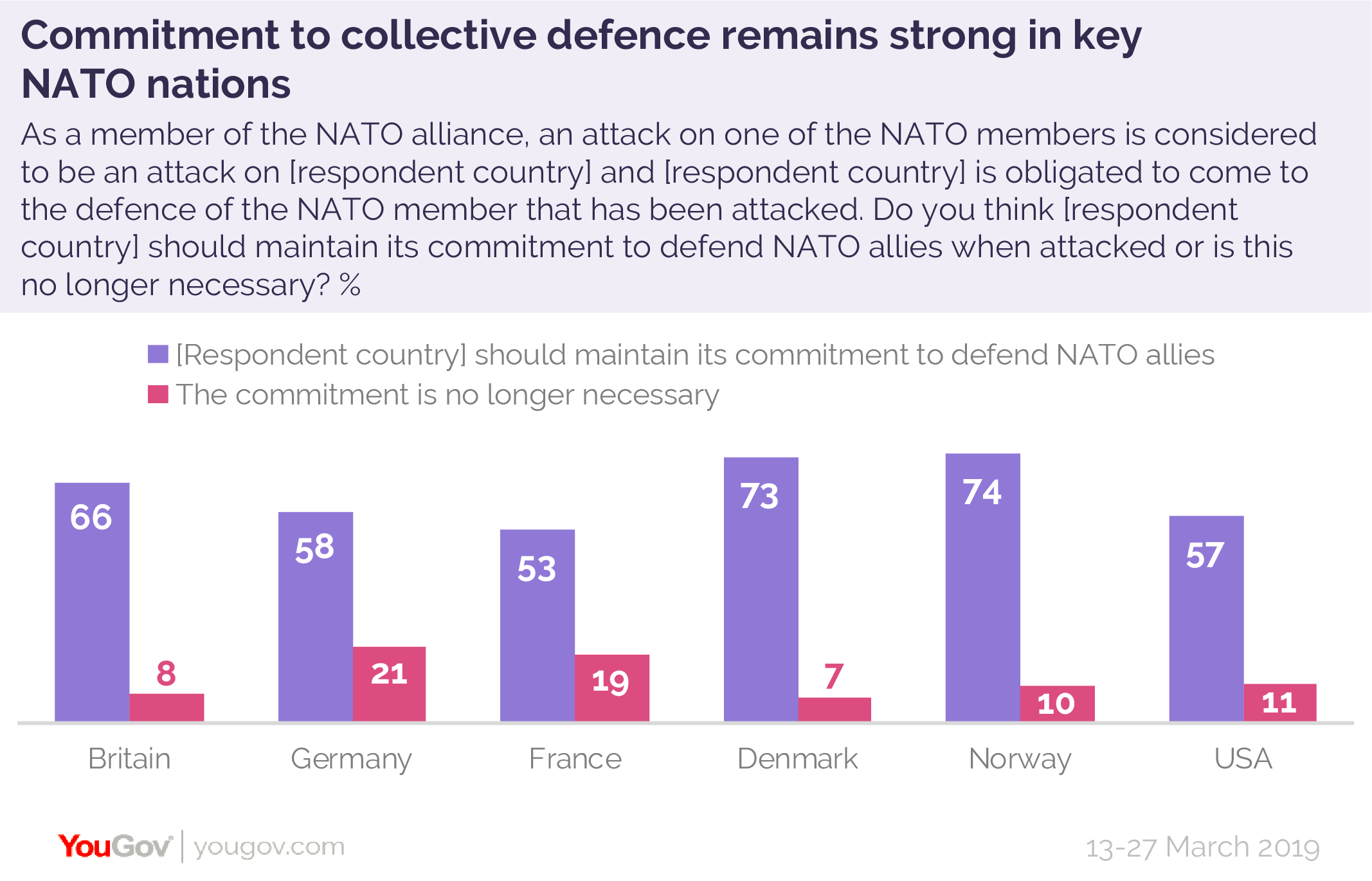 That holds true until they’re asked about committing to defend specific countries.

We asked respondents whether they thought their nation should be willing to defend each of 13 other nations, 10 of which are NATO countries with the remaining three (Sweden, Finland and Ukraine) being partner countries, as well as likely Russian targets should conflict break out.

While pluralities tend to back coming to the aid of most nations, there is particular ambivalence about defending Turkey, despite its status as a NATO member. In fact, only in the US do people tend to think Turkey should be reinforced (36% versus 22% who do not) – Britons are divided 31% to 31%, and the German and French publics oppose rather than support defending Turkey by huge margins. 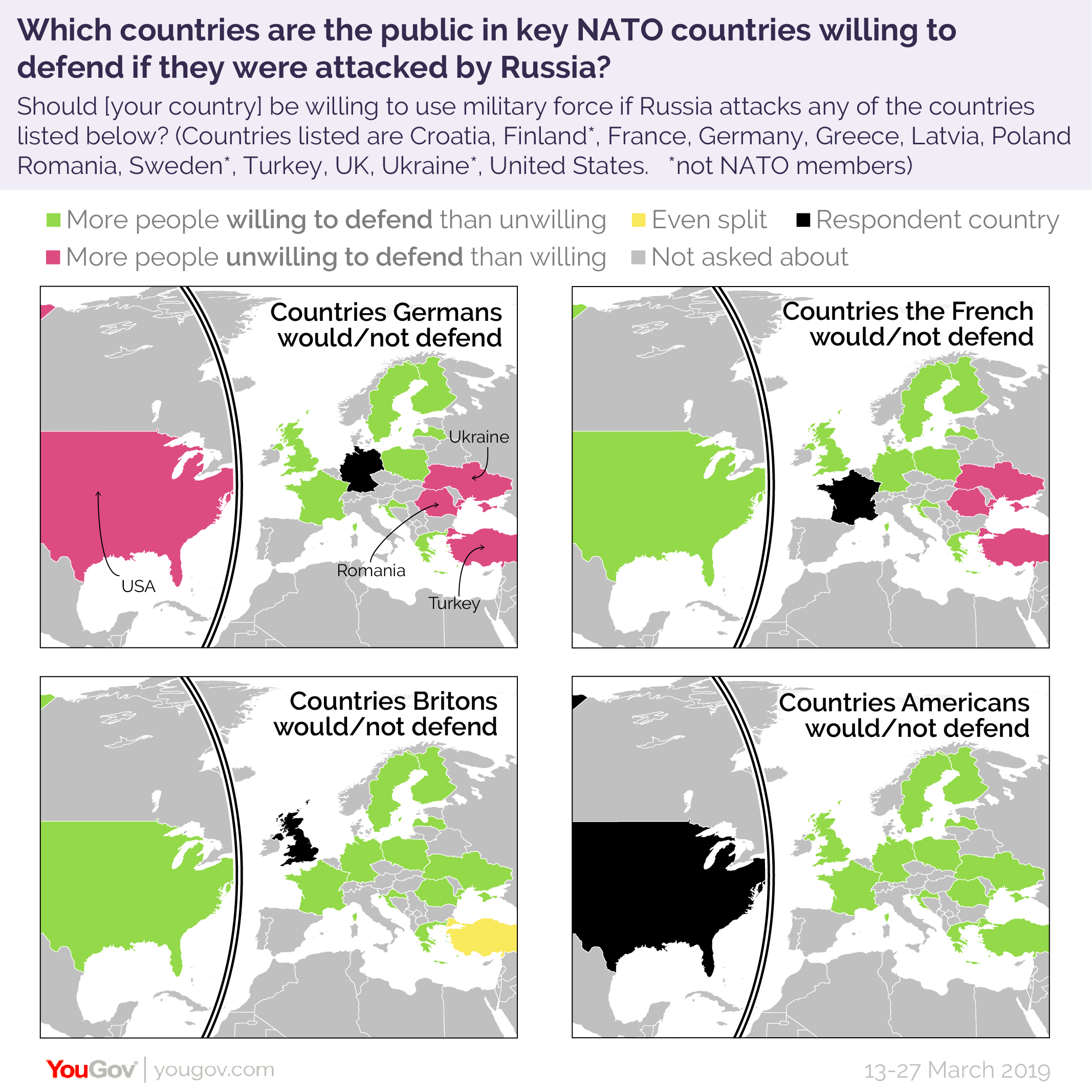 The French and German publics would also rather not come to the aid of beleaguered Ukraine – which had once seemed on the cusp of NATO membership – or Romania. Germans also object to the possibility of defending the United States from attack by 43% to 32% (by contrast, 54% of Americans think they should defend Germany should it find itself besieged).