Migration is seen as a blessing for cuisine, but also a catalyst for crime

With immigration becoming a more pressing national issue in recent years, a new YouGov survey conducted in seven European nations and the United States has sought to find out exactly what citizens believe to be the impact of migrants on their country – for good and ill.

Food, culture and sport are the top areas to benefit from immigration

In all countries except France, the most commonly agreed benefit of immigration has been better food. This figure was highest in the US, Norway and Britain, where around half of people (between 47% and 50%) think migrants have had a positive impact on cuisine. 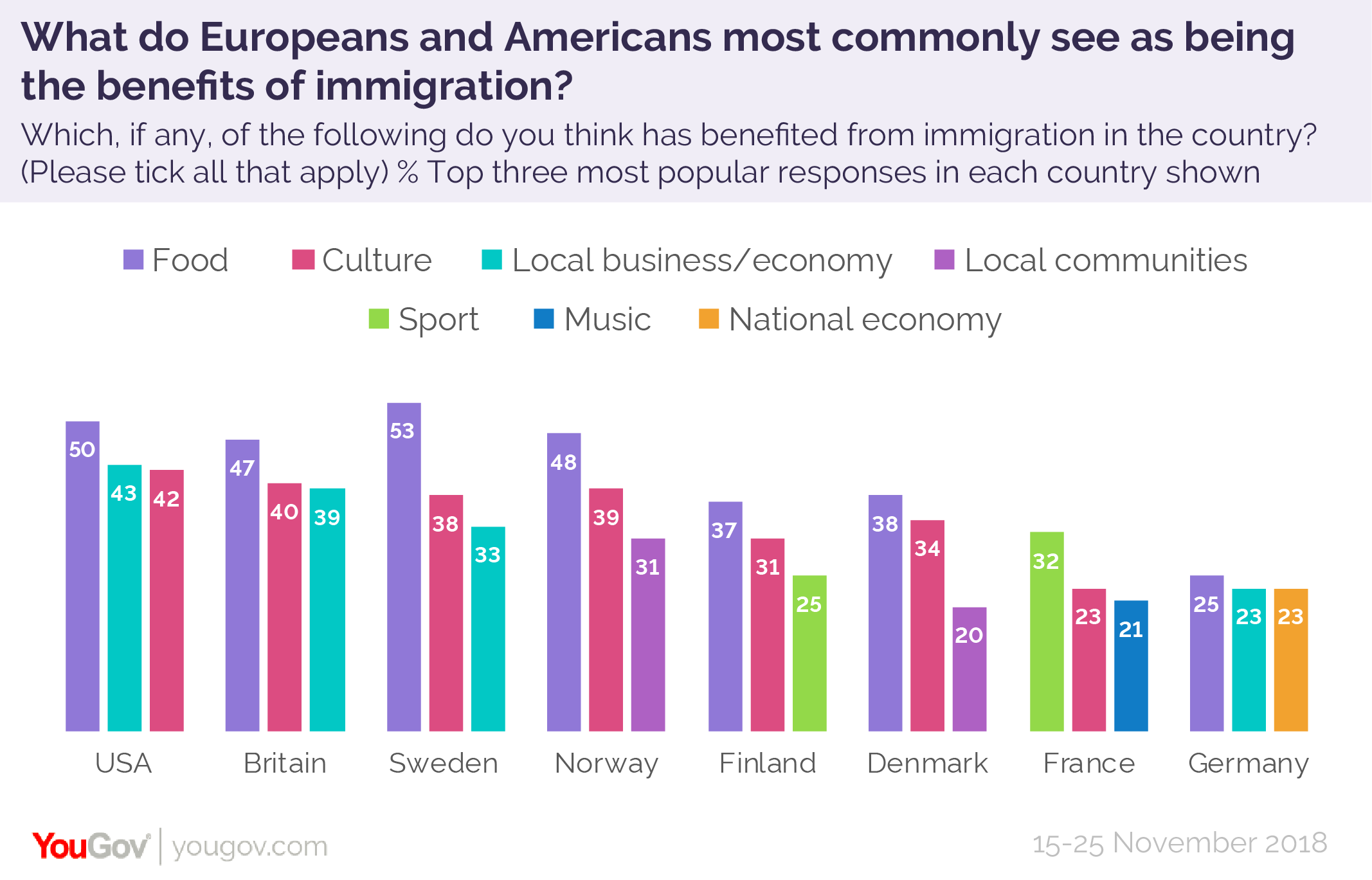 Migrants’ contribution to the national culture is also widely acknowledged, being the second most frequently mentioned benefit of immigration in most nations (and third in the US and fourth in Germany). Again Americans, Britons and Norwegians are the most likely to feel their nations have benefitted in this way at between 39% and 42%, along with 38% of Swedes.

In contrast to the other nations, the French are most likely to see the biggest benefit of immigration to have been on sport at 32%. Alongside the Germans, they are, however, the least likely to be able to name any benefits of immigration, with only half (between 51% and 52%) being able to put their finger on anything that migration has made better in their country.

Crime is the most negative outcome of immigration

The most commonly given downside of immigration is increased crime, coming top of the list in five of the countries we surveyed and second or third in the others. It is especially likely to be cited in Denmark, Sweden, Germany and Norway (at between 62% and 68%).

People are also consistently worried about the impact immigrants have on national security (between 31% and 62%) and their country’s welfare systems (between 33% and 48%). 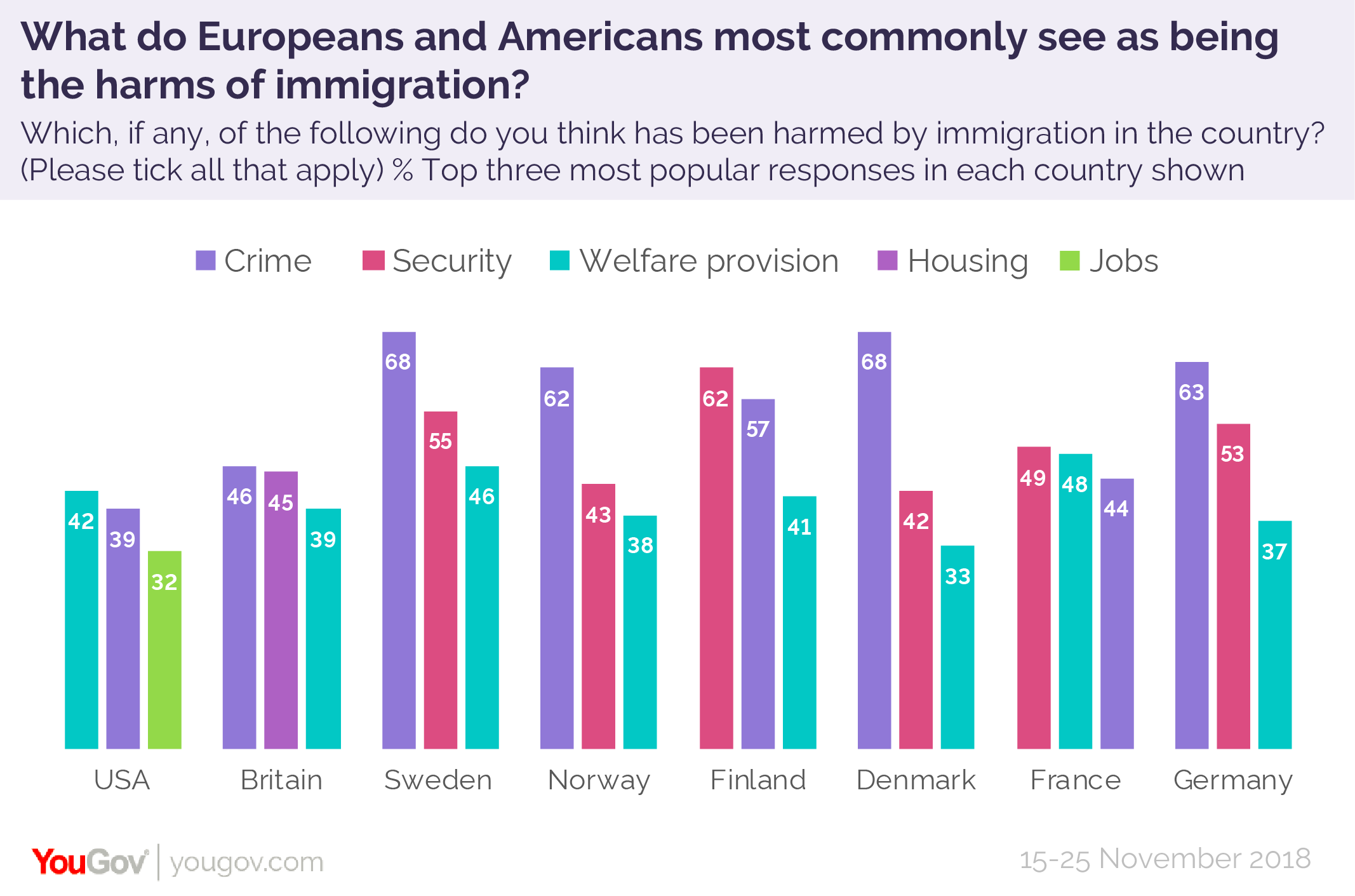 In Britain and Sweden people are more likely than those in other nations to see a negative impact on housing (between 44% and 45%) and healthcare (between 36% and 37%, alongside 39% of French people).

The impact on jobs is also a bigger concern in Britain and France (29% each) and the US (32%) than elsewhere.

The proportion of people who gave at least one negative impact of immigration is higher in all countries than the number who were able to give a positive one – except in the US where 71% could name something good that immigrants have done, compared to 65% who could point at something bad.

Looking at combined answers to the positive and negative aspects of immigration reveals that one in four Americans (30%) believe it only brings benefits, making them the most pro-immigration nation. Britain comes a distant second in this regard, on 22%.

By contrast, 37% of Germans were only able to name negative consequences of immigration, making them the most sceptical of the countries. They are followed by France, Finland and Denmark where around a third quarter (31-33%) likewise have nothing good to say about immigration.

This identifies the extent of the most die-hard groups on immigration. A further question looked at the more nuanced picture of whether people found the overall impact of immigration tended to be more positive or more negative. The nations split into three groups.

The first (France, Germany, Denmark, Finland and Sweden) are more likely to say that immigration has generally had a negative overall impact, and by wide margins. The Germans in particular feel immigration has been broadly bad for their country – 53% say this compared to just 18% who feel the opposite. 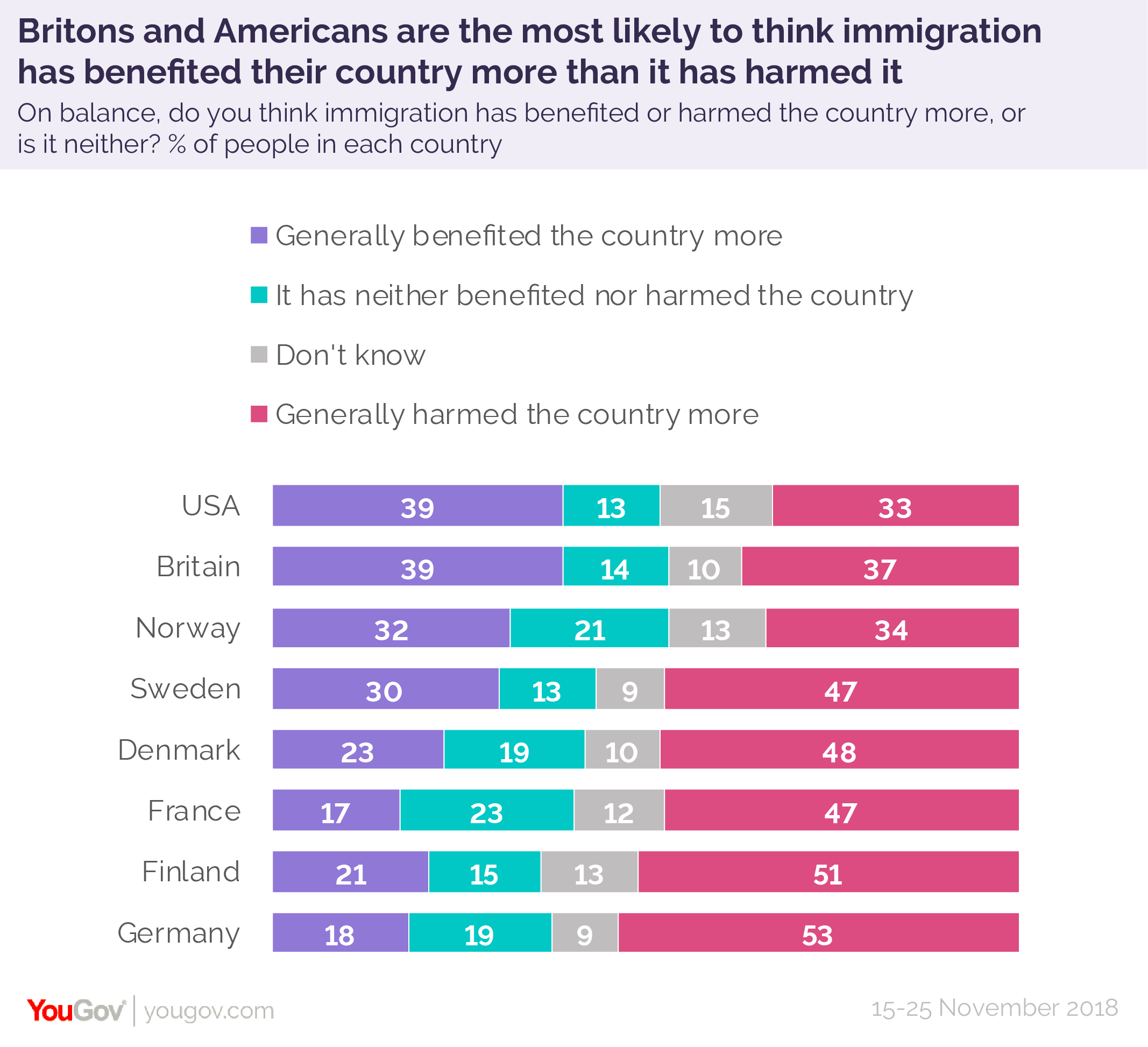 The second group, into which Britain and Norway fall, are split. In Britain 39% think immigration’s impact has been more bad than good compared to 37% who think it has been more good than bad. In Finland these figures are 32% and 34% respectively.

Alone in the final group is the United States, where people are in fact more likely to believe that immigration has been better for the country than not, at 39% compared to 33% who take the negative view.