Pfizer and Moderna vaccines seen as safe across all nations studied

A month after the blood clot scares rocked confidence in the AstraZeneca COVID-19 vaccine, a new YouGov EuroTrack survey finds that people in several countries remains sceptical of the drug.

In France and Germany, the passing of a month has made no difference to belief that the drug is safe. Just 34% of Germans consider the vaccine to be safe, from 32% in March. Just 23% of French people feel the same, likewise about the same as the 22% who said so the month before.

Currently 56% of Germans and 64% of French people consider the AstraZeneca vaccine to be unsafe.

The results also show that Danes have since become much more nervous about AstraZeneca’s offering. While Danes were split 42%-42% on the vaccine’s safety in mid-March, by mid-April this had changed to 25% considering the shot safe vs 64% believing it unsafe. It is worth noting that exactly at the point of fieldwork in Denmark (14-17 April) the country abandoned the AstraZeneca vaccine entirely after further blood clot concerns. 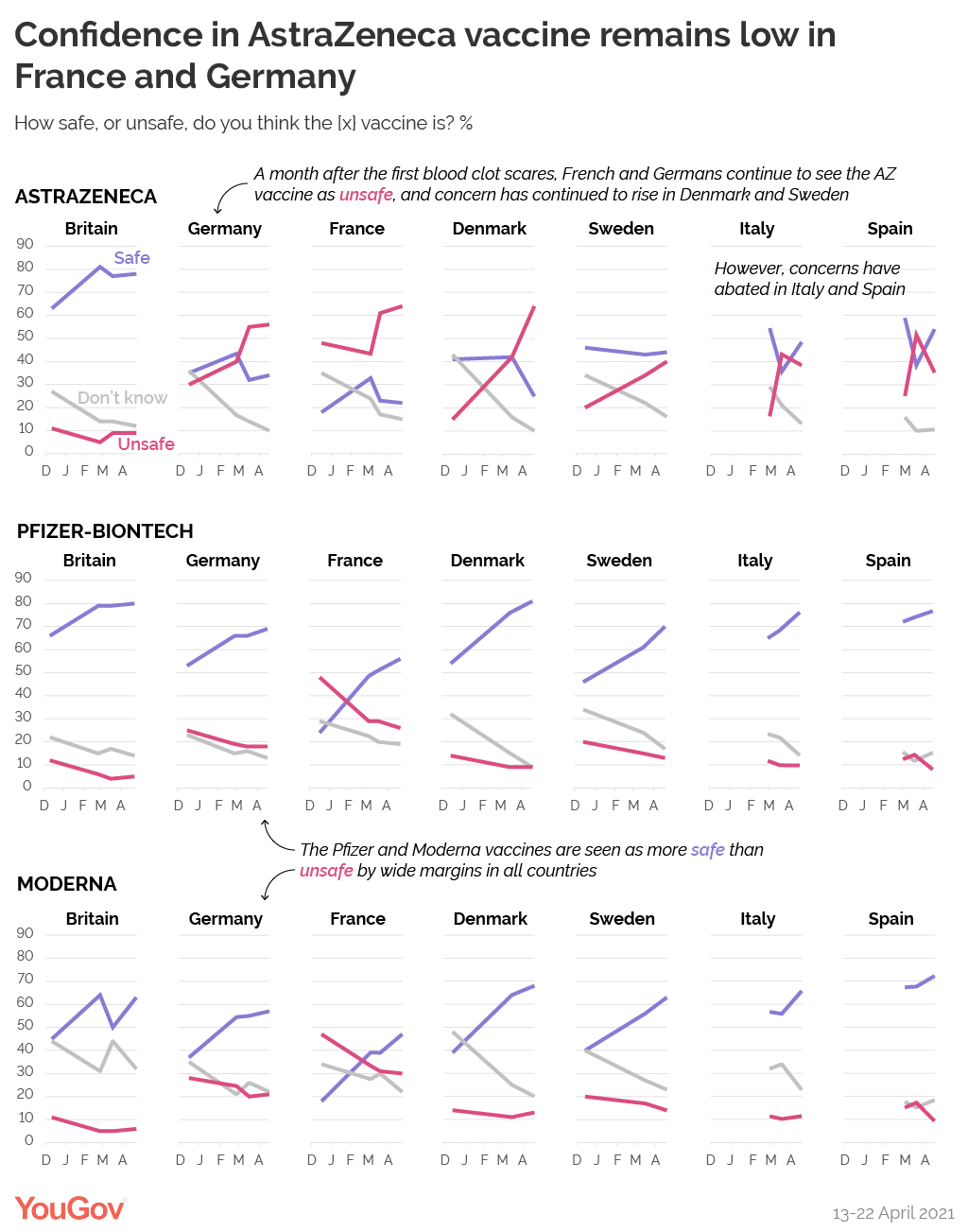 In Sweden too, concern has continued to rise. Four in ten Swedes (40%) now think the vaccine is unsafe, close to the proportion who consider it safe – 44%, a figure which has remained consistent since December.

The results of the survey are not all bad news for AstraZeneca, however. Fears about the company’s vaccine have eased off in Spain and Italy, with 48% now considering the drug safe in Italy (up from 36%) and 54% believing it to be safe in Spain (up from 38%). In both cases, this represents a flip from people tending to think the drug is unsafe to tending to think it is safe.

On top of this, the survey shows that Britons continue to have strong confidence in the AstraZeneca vaccine, with 78% considering it to be safe. This figure remains largely the same as in March (77%) and is similar to the peak figure of 81% recorded in February. Only 9% of Britons currently consider the AstraZeneca vaccine to be unsafe.

Attitudes toward the other two vaccines we have been tracking remain positive – large majorities of people in every country studied express confidence in the Pfizer and Moderna vaccines. The only exception is France – the most vaccine-sceptical nation – although here too the vaccine is seen by more as safe (47%) than not (30%). 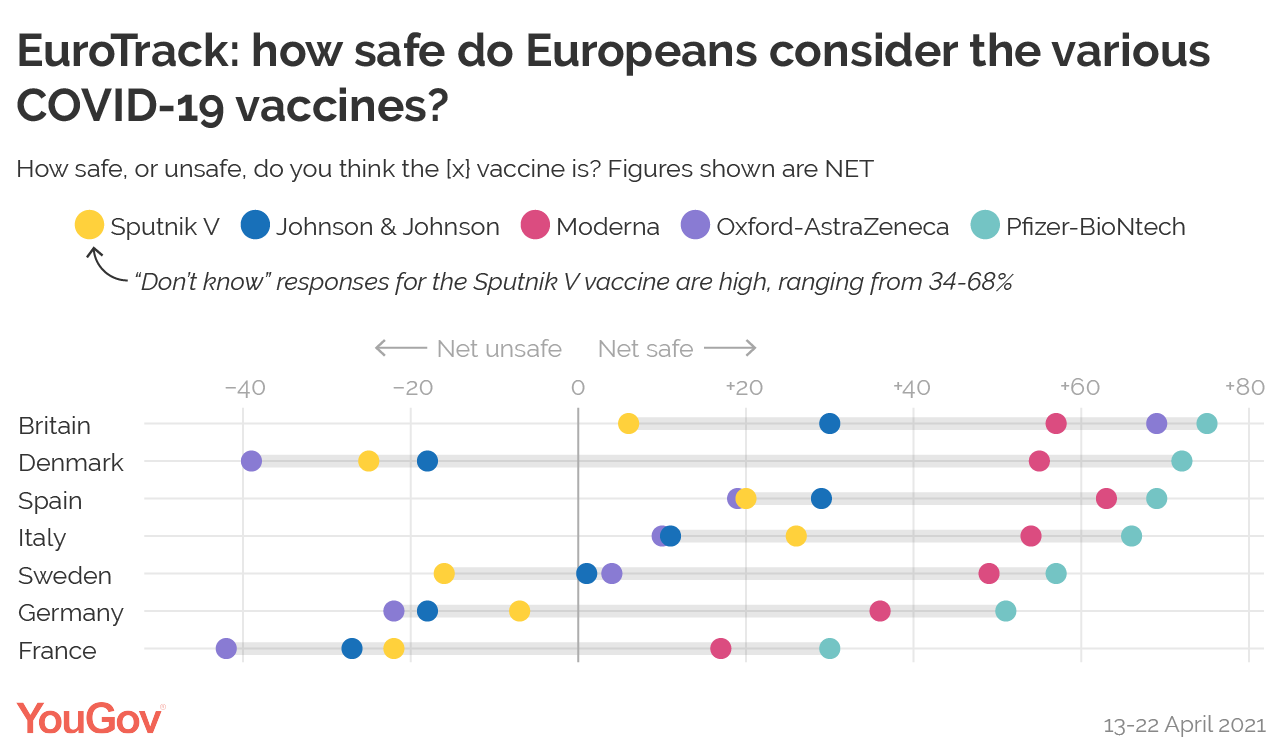 With supply issues hampering the continental European vaccination programme, several countries have opened negotiations with Russia to purchase their Sputnik V vaccine. A previous YouGov study indicated that people would tend to look upon a Russian-developed vaccine more negatively, but what do the results show?

The results are mixed. In Spain and Italy, some 41% of the population consider the Sputnik V vaccine safe, with only small numbers (21% and 16%, respectively) saying the opposite.

In other countries, however, the results are much more negative. In France, Denmark and Sweden, the Russian vaccine is seen as more unsafe than safe by wider margins. In Germany opinion is more mixed, with 30% believing it to be safe and 37% considering it unsafe.

British opinion is also split, largely because of the massive 68% of Britons who are unsure about the vaccine’s credentials. One in five Britons (19%) consider Sputnik V to be safe, while 13% do not.

In fact, in all countries the number of people saying “don’t know” regarding Sputnik V is substantially higher than it is for other vaccines (34-51%, as well as Britain’s 68%). This is perhaps unsurprising, given that the Sputnik V vaccine is currently not in use in any country studied.

The new Johnson & Johnson vaccine has already had its fair share of trouble, having seen its use paused in the USA and other countries because of potential connections with blood clots.

It is likely for this reason that Danes, Germans, and French people see the vaccine (also referred to as the Janssen vaccine) as more unsafe than safe by wide margins. As with AstraZeneca, use of the Johnson & Johnson vaccine has been abandoned entirely in Denmark since the latest survey was conducted.

Swedes are split, with 35% consider it safe to 34% unsafe, while in Spain, Italy and Britain (the only country in which it is not currently approved for use) the vaccine is much more likely to be seen as safe.